YOU WILL SHOOT YOUR EYE OUT, RAJI – A LINDIAN CHRISTMAS STORY (Repost)

(repost from Tales of the Fiction House)

Seeing all the wonderful presents given and received, I remember a favorite gift wish.

Our Founder, James Thaddeus “Blackjack” Fiction
‘Tell our stories, Raji. If you don’t, it will be as if we never lived.’
These whispering cries of joy and sorrow rise from the bookshelves and portraits in the Fiction House.
I cannot refuse.
(Artwork enhancements by: Joseph Rintoul)

Just like the bespectacled Ralphie in the movie A Christmas Story, as an eight year old I yearned for a Red Rider BB gun.  Growing up in Cincinnati’s Lindian community – not big meat eaters or hunters – no one truly listened when I said I wanted this.

I dreamed of making grand safaris into the magical, mysterious Lindian Woods not far from my house.

“With my Red Rider…” quite often I excitedly boasted to a kindly, yet unsympathetic old Uncle or Auntie.  “…I could fortress in the wilds of the Lindian Woods and protect the city from errant tigers.”

They’d reply, all the while laughing gently at their own impromptu humor.  “PSHAW!  Precious Raji.  50,000 Bengals fill the football stadium every other week.  You could never keep enough BB’s in stock.”  Then these wizened elders, the tiny bells on their sarongs jingling, the beads on their shirts beating as they jiggled from the laughter, would add something like, “Cobra and Mongoose from our homeland have yet to find a way to traverse the oceans.  So we need no protection from them.  What then remains, dear boy, for you to save us from – the furry little rabbits and squirrels?  They are not so vicious.”

Then, just as Ralphie’s teacher, his mother, and even Santa replied to Ralphie, the Uncles and Aunties guffawed to me, “You’ll shoot your eye out.”

But Ralphie’s fa, ‘the old man’, had a Red Rider when he was eight.  He surprised Ralphie with the pump-style air rifle on Christmas.

An equally understanding – at least, seemingly, at the time, old Uncle came forward for me:   on my Christmas.  He always dressed nattily, in starched, pressed cotton pants, and a vest over a dhoti shirt white as his wavy hair.  Every glance, every eye flicker, and every movement of his lean body professed to the world his philosophy of life:  ‘To stand on ceremony is the duty of all.’  (He must have come from generations of British Colonial influence.)

The BB gun – He presented it to me as ceremoniously as if he had been a Royal Brigade officer back in Lindia, and he was pinning a medal of valor on my jacket. 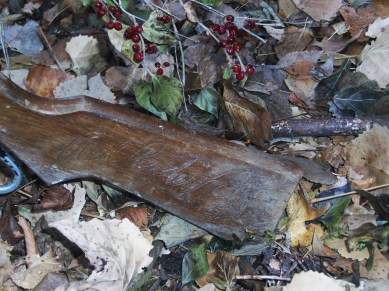 I remember vividly to this day standing as if frozen briefly in time, a new recruit in front of Colonel Uncle.  The emotions I felt – They are indelibly imprinted in my thoughts:

The Red Rider isn’t shiny and new like Ralphie’s.  The wood stock is worn and faded.  Nicks, gouges, and dents tattoo the tarnished barrel.  But I feel just as lucky as Ralphie.

I run my fingers over the cold steel and splintered wood.  All my eight-year-olds senses absorb the ardor of battle my Red Rider must have encountered over the decades.  I smell the decaying rot of defeated cobras saturating the stock.  I can almost taste the dank of the fur of a charging tiger, “brought down by just a single BB”, I imagine someone bragging over ale at a bistro.

As if it were a seashell, I put my ear to the barrel hole.  Instead of ocean, I hear the calamitous trumpeting of a herd of elephants scared away from an isolate village’s garden, and back into the jungle.  I stroke the splintered teeth marks of a vicious mongoose that tore wildly into the weapon before being subdued.

After a ceremonious pat on the shoulder from crater-faced old Uncle and the even more ceremonious statement,

Into the Lindian Woods, I foray, to take my place among the tribe of humankind known as, INTREPID HUNTER.

I dribble a handful of copper BBs into the holding chamber.  I pump the cocking handle.  I take aim skyward, at Poppy Sol.  He glares, reprimanding me with a stinging ray.  So I move my point, toward a gluttonous cloud.  ‘I’ll pop that belly.’  I feel like Papa Hemingway readying to bag his first Rhino.  My hands sweat as I pull the trigger.

That is what I expect.

The BB arcs like a rainbow, for not more than 20 feet.  I see where it goes…toward the pond…toward the rubbery lily pad where the Frog Brothers, Frer and Brer, rrriibiit on about the daily news of the Lindian Woods.  Plink.  The BB lands between them, breaking their conversation, and then it bounces off, plunking into the water.  Their sudden stares and immediate deep CRROOAAKS indicate they mock me.

‘There’s that Raji kid again.  The one who almost shot his eye out with the slingshot, last week,’ says Frer.

‘A nuisance he can sometimes be,’ replies Brer, sticking his tongue out at me and simultaneously nabbing a fly.

In unison, they croak loudly, ‘You’ll shoot your eyes out, kid!’

Again and again my shame heightens among the Lindian Woods inhabitants as the velocity of the BBs lessen with each shot.  (Seems the relic Red Rider can’t hold the charge of hand pumped air for more than a few seconds.  But I wouldn’t discover that cold fact until later in life.)  Another shot strays into the water, splashing between a circle of ten napping otters, who hold hands as otters outta whilst sleeping, to keep from floating away from each other.  Seemingly, one at a time their eyes open and they berate me for disturbing their slumber.  ‘You’ll shoot your…’  I get a feeling they’re readying to turn together on their sides, like a wheel, and roll over the water to chase me from their Woods.

I quickly scamper to a meadow where birds are singing joyously.  I shoot skyward.  POP!  The singing abruptly ends and the birds scatter.  Out of nowhere, the Lindian Woods Sky Patroller, Hawk, barrels in from out of nowhere, grabs the BB mid air, flies, just feet over my head, and flings it down hitting me on the head.

“Ouch.”  That is the fastest one of the projectiles flew that day, or would ever again fly from that dilapidated Red Rider. 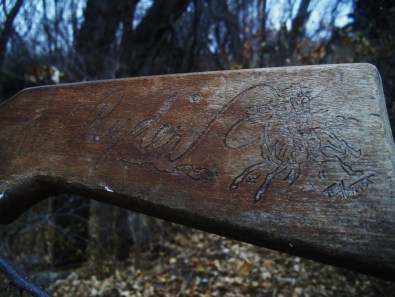 ‘Never do that again,’ I know is Hawk’s plaintiff cry.  Hawk eyes me viciously and then missiles out of sight.

Sigh!  I guess I may now know just why we Lindians are no hunters.  Likely, we’d starve.

O.K., I will shoot at trees.  Not one barks at me as I take aim.  So I fire.  Relic Red Rider suddenly takes on a life of its own – but unfortunately, it is in the form of a death gasp.

The BB spits weakly from the barrel, barely going two feet before it drops.  I hear a screech.  In animal parlance, I believe it means – “Hey, whattaya think yer doin!”  I look down, just as the BB bounces off the head of a rabbit, then ricochets as the little fella jerks its head.  The BB flies five feet horizontally, and nearly takes out the eye of a squirrel.

The rabbit’s screech, the squirrel’s angry, loud ‘CHHIIRRP!’ tells me,

“Run, Raji!!  Like your life depends on it.”  As angry as the critters sounded, I am sure my life really did.  (Harmless creatures, as Uncles and Aunties claimed; Hhrmph!)

Squirrel and rabbit give chase.  They’re on my heels, snapping, grr-ing, for hundreds of yards, until I am well clear of the Lindian Woods and onto a city street.

I near my Lindian neighborhood, out of breath, and I see my ceremonious old Uncle.  He is sitting cross-legged, on a small rug under a Lindian Fan Tree.  It is as if he has been waiting, patiently, for me.

“And how went the hunt, young Raji?”

Wait, is that what some would call a ‘knowing smile’ that slightly crescents his face.

I return the gun as ceremoniously as it was given to me.  I summon enough breath to say.  “Take it Uncle.  Never bring it back.  No matter how careful, it’s only a matter of time, before,

(Join me every Sunday night at the Fiction House, your place for short story, lark, whimsy, and merriment.  Meet the many residents as I archive their lives and centuries of adventures.  You can read of their origins in my novel TALES OF THE FICTION HOUSE.  They are completely different stories.  My novel is available at Amazon, (Kindle and Trade Paperback) and Barnes and Noble.)

I am a writer, a foundling anchored by tale-telling and imagination. Read my history in Tales of the Fiction House, available at Amazon.com and Barnes & Noble (This is a portrait of my great-great grandfather. He's a handsome devil and I am his spitting image.)
View all posts by Raji Singh →
This entry was posted in Humor, Nostalgia, Short Story, Slice of life and tagged A Christmas Story, childhood, humor, Movie A Christmas Story, Raji Singh, Red Rider BB gun, Reminiscence, Tales of the Fiction House, whimsey. Bookmark the permalink.