The Trauma of Trilogies 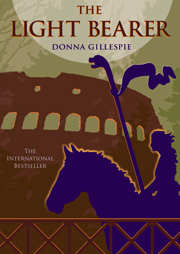 When I first made the jump from short stories to a novel, I used to say that if the raw excitement of getting swept up in a short story could be compared to starting an affair, writing a novel was marriage with ten kids. By that measure what I’m doing now feels like marriage, ten kids, and omigod I’m raising the grandchildren.

I’m on book number three of an unanticipated trilogy and can only say that plotting the third book of a series is like starting a marathon with two backpacks strapped to your back. They’re heavy as hell, and about forty yards down the road they start slipping. Stuff starts spilling out. It’s lighter now! — you think. Much better! But no, this isn’t right. I can’t dump this story line; the first two books won’t make any sense if I do. I have to find a place for that character; I developed her in the last book and she’s, well, there.

This all came about because I wrote book number one to stand alone. At the time it seemed my first book (The Light Bearer) had wound down to a natural end. I was eager move on and start rooting around in fresh nooks and crannies of history. But then later I changed my mind. Even though it felt cruel to rip open that package where my characters were languishing in their reasonably happy ending and fling them out into the mean world again — and at first it put me into a sour and nihilistic funk just thinking about it — I had to do it. I’d begun to be haunted by thoughts of my characters’ future lives. On top of it, I missed those guys and just wanted to be with them again. But these days I’ve come to believe the best way to handle this trilogy business is to write all three volumes through at least once, even if it’s just a sketchy draft toward the end.

I’m discovering there’s a lot of water under the bridge by book number three. A Hoover Dam’s worth. All the characters have extensive histories with each other. The trickiest part of plotting, now, is concocting ways to bring forward information from the previous two books while making this material seem necessary to understanding the conflict in the present. I’ve lost the right to pick a scene just because I think it puts my characters under the right kind of pressure, accomplishes what it needs to with economy, and deepens the characters. I have to pick a scene because it’s all those things —  and brings forward the maximum amount of information from the previous books. And does so dramatically, not statically. Another noisome part of all this is having to hunt down all those pesky details from two books ago that I’ve simply forgotten about. Did I use the ancient or modern spelling of the name of that river? What motivated that character? — hell if I remember. And god forbid I slip up and resuscitate someone who died. I have to steel myself to go back and look things up — and who jumps for joy at the thought of mucking around in their old prose? I’ve heard some writers actually pay someone else to do this and I can understand why.

To stop myself from whining I remind myself of the perks. Pre-assembled characters. Pre-crafted world. Pre-molded main story line. And as for research — if you don’t already have it in your head, by now you know right where to look. And I tell myself that somehow, it will all work out.

When I first decided Light Bearer would be a trilogy, Leonard Bishop was still around and I got a chance to ask him if he had any advice to give about unplanned sequels. He said to write each book so that it wouldn’t matter much if you never got around to writing the next one. But lately I’ve been hotly debating this advice in my head, since the cliffhanger ending of book number two has already pretty much made hash out of it. Part of me wishes I could just open with a note to a reader: Sorry, I know it’s a huge hassle but you really kind of have to have read the first two before you start this one….

By now, so many past conflicts have had to be brought forward that spillage is happening — one book can’t contain them all. I’m deciding that some open ends will have to remain open ended, some open questions will never be answered. Number Three is losing its single-novel tidiness, slopping over its boundaries, letting in the chaos of life, developing so many story-rivulets dribbling out in all directions, I feel they’ll never come together in one river again. But hopefully, I tell myself, while it’s losing tidiness it’s gaining something else. Somehow this wild, unmanicured book I’m working on now seems to be more in harmony with how life actually unfolds. For one thing, there are no ‘reasonably happy endings’ — what was I thinking? How can there be, when nothing ever really ends?

26 Responses to The Trauma of Trilogies