My New Bike…The Whole World in Front of Me!

Today I rode my new bicycle.  It’s a cruiser that was used as a rental from our local bike shop, but it’s in top notch shape.  I bought a new helmet and lock. It has regular pedals, instead of the ones with the clip-ins. I’d tried them before and they’re impossible!  I need to come to a quick stop and could never get the clips to release.  Almost killed myself a couple times!

I kept putting off the ride after I bought the thing.  I was nervous about it for some odd reason.  I wanted to go with Clay but he’s been so busy and when he finally gets some down time, it’s the end of the day and too hot or too close to dinner or, some other excuse I was always able to come up with. I finally threw the bike in the car and just went.  The Joe Rodota trail out of Forestville begins at the little local park and goes all the way to Sebastopol, about 8 miles.  I thought I really better start slow and not leave it all on the road the first day, so I stopped at Green Valley Road, for a 45 minute round trip.

I felt just like a kid again, thinking about being 12 and barreling down the road on my blue Christmas bike.   There was an older gentleman sitting in the park and I told him I was headed out for a ride on my new bike.  He told me to “be careful!”  While I was riding, I saw some girls in front of me and rang my little bell.  As I passed I said that was my first time to use my new bell on my new bike.  They said hooray! And I threw my fist into the air.  I would have embarrassed the heck out of my children.

Then I ran into (not literally!) an old guy on an electric bike. I had stopped to wait for him to cross a bridge.  His name is Duke, he lives around the corner behind the gas station in a mobile home park with his wife, he’s married (happily).  I said I guess I wasn’t going to put any moves on him today then.  He proceeded to tell me all about his life.  Where he lived as a kid, the bike he rode, his motorcycle, the games they used to play…. I finally had to stop him and said, “Wait!  Let’s save that story for another day.  I know we’ll meet again and I’ll bet there are a lot more of them.”  He said there certainly was!  I’ll try to avoid him unless I have a lot of time to spend – hah!

It was a wonderful first adventure and while I don’t feel “old”, it certainly reminded me of when I was young, with the whole world in front of me.    Love, C 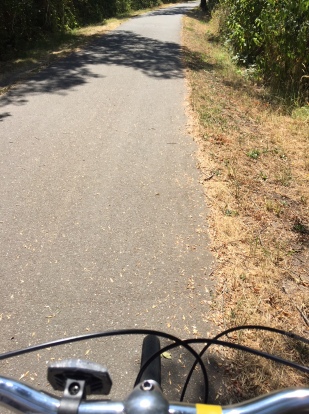 I am a writer and teacher mentor.
View all posts by Catherine Hedge →
This entry was posted in Family, Humor, Nostalgia, Slice of life, travel and tagged adventures, bicycle fun, Celeste Gantz, family, new bike, nostalgia. Bookmark the permalink.