A Half World Away, A Half Century Gone: Afghanistan…Part 2

(Fifty years ago, John Borel was one of President Kennedy’s first Peace Corps volunteer in Afghanistan.  He wrote about his experiences in his post.  His visits to our home during those years were magic.  I remember waiting eagerly for night to fall so my parents would pull out the screen and slide projector.  We knew Uncle Johnny would tell us stories of a land and people so far away that to my young mind, they were as fantastic as the tales of Gulliver.

Now, most of us are sadly familiar with the names, Kabul, Jalalabad, and Nuristan through the world of war.  We thought you would enjoy pictures of this land from a man whose focus was peace.   C. Hedge) 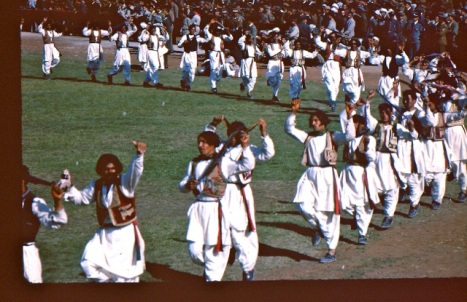 1)  Dancers from Jalalabad at the Jeshyn, the National Independence Celebration circa 1964.  They are dancing 147 different steps.

2)  Buzkashi players at Jeshyn in the Ghazi Stadium, circa 1964. The rider on the white horse is carrying a dead calf and will attempt to drop it in a circle, but the other team will take no prisoners in trying to stop him.  Riders and horses kick and bite. The sport involves hundreds of riders in the northern part of the country, but only two teams of 11 are playing here. Horses train for years to reach this level, as do the riders. On the day I watched, the horses galloped into the crowd and two people were killed.

3)  Don Hill, one of my four Peace Corps roommates, and me in our house at Karte Char,in Kabul,  being served dinner.

4)  The drummer’s hands and dutar player (two strings)(I can’t remember name of drums, want to say Tamba).  Afghans love music and story telling, both of which were prohibited by the Taliban when they took over.

5)  Afghan student with unique knife and me during 100 mile, 10-day hike into Nuristan (Land of Lifght. Before conversion to  Islam in the 19th century it was called Kafirstan (land of infidels.) The student would travel long distances to school in Jalalabad where he lived during the school year. Standing behind him is one of our guides.

6) Nuristan. The four of us hikers being hosted by shepherds and given the goat shed to sleep in, which caused the goats considerable displeasure, as they tromped on the roof all night.  The U.S. war in Afghanistan was often fought in Nuristan. 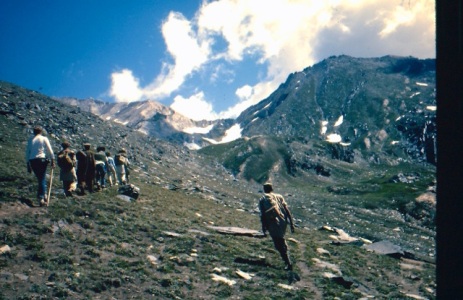 7) Nuristan. Hiking up and over a 15,000 foot pass on our way to Kamdesh, the capital of Nuristan, where we got a ride back to our car in Jalalabad.  We rode in a truck that had its gas line put together with bamboo, making it possible for a large number of villagers to go back to Jeshyn. Very scary mountain ride.

8) Jeshyn. A highly skilled rider of Tentpegging, the sport where riders with spears gallop at high speed and spear the tent peg, pulling it out of the ground. In olden times, a war tactic; when the tent collapsed it was set on fire. 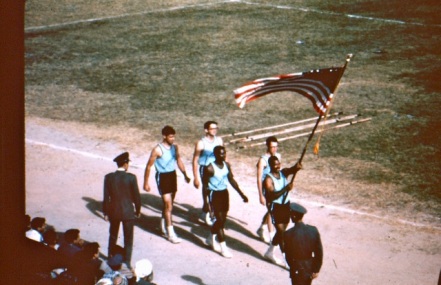 9) The Peace Corps basketball team which played the University of Kabul during the Jeshyn celebration. I am in the back.