A Great Dog to Blog 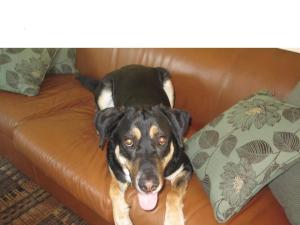 I solved my dilemma, to Blog or to Dog.   It turns out that those two choices have a lot in common.  Both are approached with fears, defined by trial and error, and launched with blind hope.

I discovered this while accompanying my sister, Celeste Gantz, to the Healdsburg Animal Shelter. Bailey, Celeste and her husband’s dog died, much to our great grief.  Their home was much too quiet.  No nails clicking on the hardwood floors at midnight.  No wet dog toys stuffed in the corner of the couch.  A half-full bag of treaties left beside the cereal.  We all miss him.

Celeste saw an ad on-line for “Cooper” at the shelter.  He looked friendly, substantial, a “doggy dog”.  All morning she debated whether we should go check him out.  What if it was too soon after Bailey died?  How could she leave him behind if he might be euthanized?  What would she do if she liked him, but Clay didn’t?  We went to get coffee and pastries instead.   Stalling.

Later, Clay asked us if we’d seen him.  No good excuses left.  It was only 2:00.  Three hours before the shelter closed.

We met with Cooper and Celeste took him through his paces.  He sat when commanded, stayed, didn’t jump much, and let us pet him.  He was clean, healthy…a very adoptable dog.  He checked out the pee scents in the yard and came to us only when commanded.  Celeste didn’t smile much.

She decided to fill out the paperwork and think about it.  Just as she was leaving the counter, she said to the staff, “It’s hard to decide.  We’ve always been more of a Lab, Sheltie family.”  In chorus, the two women said, “Have you seen Cowboy?”  There was such joy in their voices,  Celeste and I turned toward each other and mouthed, “Cowboy?”

Four seconds later, (They were fast!) we stood in front of “Cowboy”.   He stared up at us as if we were the loves of his life.   Celeste gasped and her tears shot straight out.  She put her hand to her heart and cried, “Now, that’s what I’m talking about!”

We took him out to the yard and he did all the same routines.  The difference was, when she said, “Good Dog!”, he wriggled all the way from  his slobbery tongue to his otter-like tail.  She called Clay and he was there in moments.  The joy in her voice was all he needed to hear.  When Clay walked into the dog yard, Cowboy greeted him by bowing his head.  He pressed his forehead and snout gently against Clay’s thigh.

So, does this sound like your blog?  You’re afraid to start.  You think of a ton of reasons why you can’t or why your topic is no good.  You stall.  There’s a deadline.  You start with a standard bag of techniques to create a logical, reasonable piece.  It could be okay.  But something’s missing!  You try again, maybe even starting over.  Finally, whether it’s a line that makes you laugh or weep, you call out, “Now, That’s what I’m talking about!”  You’ve found the flow.  The deal is done.

You should know, we’ve called him “Jake”.

(We’ve since learned Healdsburg is a “no-kill” shelter.  Check out where our pal is now living happily!  Gantz Family Vineyards.  Celeste, good luck on your blog!)

I am a writer and teacher mentor.
View all posts by Catherine Hedge →
This entry was posted in Dogs, Slice of life, Writing and tagged adopting dogs, animal shelter, dogs, writing a blog. Bookmark the permalink.

7 Responses to A Great Dog to Blog