(I really wonder how J.B. made it out of this one alive!  He said it not only happened, but word for word, this is what the Cisco Kid said.  Yikes!  So glad you’re still with us, Uncle John!  Ed. )

On a lark, a buddy and I went on night

To rub elbosws with the criminals

Said to hang out at an Albany tavern,

Actually a bar on Lark Street.

When in walked a short black man

Who held the door wide open

And looked ’round the room.

Most of the guys at the bar looked up,

Then turned back to their talk and drinks.

A pair of slacks and smart shoes, and

Topped by a tall Stetson hat.

Finally, he raised his voice and yelled,

Was there anyone here born in Butte, Montana?

Well, without thinking I raised my hand

Because indeed I was born in Butte.

I forgot about the stranger…until

I noticed him sitting beside me at the bar.

“You were born in Butte…

And you’re going to die in Albany.”

Before I could think of a witty reply,

And I’m wanted in forty-eight states.

The High Sheriff of Butte ran me out of town.”

Next thing I know, he had wielded a knife,

Graphically demonstrating how to jab it

Between his outstretched fingers on the bar.

I sat there, still speechless..but

Then he asked me to buy him a drink

Which I did without any hesitation at all.

And a few minutes later the Cisco Kid

Calmed our nerves and turned his energy

To performing a lively tap dance…

On the barroom floor. 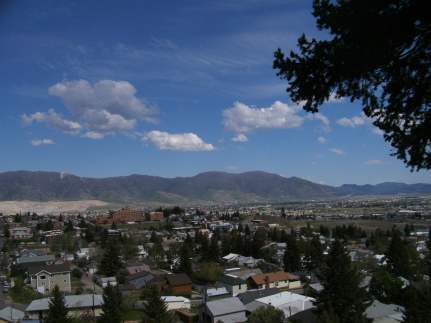 Butte, Montana…a good place to be from!