Because I Have Something to Say! 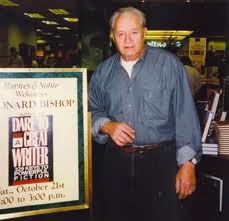 He dared us to write well!

Anyone who uses the phrase, “indomitable”  must have met my writing mentor, the late Leonard Bishop.  He grew up in conditions of poverty and violence that would destroy most of us.  He believed, despite all the contrary evidence the world kept shoving at him, that he was someone special.  He knew that deep inside him, there was talent.  He just needed to find the way to let it breathe.  For a while, he thought he might be a sculptor and needed to protect his hands. This kept him out of brutal street fights.  Good thing, too.  He was massive, strong, a likely target for boys who needed to prove themselves by besting the big kid.  He trained as a draftsman and worked a thousand odd jobs before he found his writing voice.  He knew he had something to say and the world had to listen.

If you spend five minutes watching students in a middle school hallway, you will be bombarded by personalities.  There are kids who sparkle with life and energy.  They are often loud, with long steps, large smiles, and a gaggle of followers who wish they could trade places.  Catch that person’s attention, say, “Good Morning,” and smile.  You’ll get a big, “Howdy” or “What’s up?”    Others are shy, but smile back and wave a few fingers under their binders. I’m sure Leonard would have been one of the loud ones.  I imagine him outside shouting into the wind, “Listen to Me!”  If kids like him are lucky, someone will and may be touched by what they say.

But others are the ones I worry about.  The ones whose spirits are already weary.  They are the stragglers who believe they are invisible.  Losers.  They walk head down and shuffle by the lockers, so close they bump their shoulders on the padlocks.  The locks clang loudly and the children jerk, as if the sounds are wolves in mid-pounce.   When the Invisible do speak, their words often mask all passion.  They are quiet.  Monosyllabic.  Forgettable.  What a waste.   And it’s too likely they will live out their whole lives that way.   Apathy is a great camouflage for pain.

Leonard Bishop used to come to my classroom and talk about writing.  A big, energetic, dynamo, he made the children laugh at first.   They liked him and crowded around, seeking his autograph.  Then, like a magician pulling scarves out of a hat, he made them talk about themselves, their dreams, their imaginations…or their fears.  Then, he made them write.  After a few hours, he’d know the names of my Invisibles.  He’d call them up to sit beside him and relentlessly encouraged them until they had said something profound.  I’ll never forget one eighth grade boy, over twenty years ago, who was so afraid of misspelling words that he’d write only what he was sure he could do perfectly.  I remember he wrote, “The brown cow ran.”   After two days in my classroom, Leonard coaxed out of him, “I laied (sic) under my cardboard box on the wet New York sidewalk.”  Leonard pounded him on the shoulder,  “That is Real Drama!”  I remember the rest of my students and myself staring at the boy we had never seen before.   He was transformed into someone who had something to say and could now make the world listen.

Leonard was an artist after all.  A sculptor of human beings.  Thank you, Leonard.

I am a writer and teacher mentor.
View all posts by Catherine Hedge →
This entry was posted in Leonard Bishop, Nostalgia, Slice of life, Teaching, Writing and tagged Biography Leonard Bishop, building confidence in children, childhood, Dare To Be A Great Writer, fear of writing, Leonard Bishop, middle school students, Middle school writers, student writing, teaching children to write, teaching writing, why should I write?, writing inspiration. Bookmark the permalink.

4 Responses to Because I Have Something to Say!